Dietary fibre is a generic term describing non-absorbed plant carbohydrates and small
amounts of associated non-carbohydrate components. The main contributors of fibre to the diet are the cell walls of plant tissues, which are supramolecular polymer networks containing variable proportions of cellulose, hemicelluloses, pectic substances, and non-carbohydrate components, such as lignin. Other contributors of fibre are the intracellular storage oligosaccharides, such as fructans. A distinction needs to be made between intrinsic sources of dietary fibre and purified forms of fibre, given that the three-dimensional matrix of the plant cell wall confers benefits beyond fibre isolates. Movement through the digestive tract modifies the cell wall structure and may a ect the interactions with the colonic microbes (e.g., small intestinally non-absorbed carbohydrates are broken down by bacteria to short-chain fatty acids, absorbed by colonocytes). These aspects, combined with the fibre associated components (e.g., micronutrients, polyphenols, phytosterols, and phytoestrogens), may contribute to the health outcomes seen with the consumption of dietary fibre. Therefore, where possible, processing should minimise the degradation of the plant cell wall structures to preserve some of its benefits. Food labelling should include dietary fibre values and distinguish between intrinsic and added fibre. Labelling may also help achieve the recommended intake of 14 g/1000 kcal/day.

Conceptually, dietary fibre is a generic term describing non-absorbed plant carbohydrates and relatively small amounts of associated non-carbohydrate components (e.g., phenolic compounds, waxes, and proteins) that are not digested by endogenous enzymes or absorbed in the human small intestine [1,2]. Some forms of dietary fibre are digested by intestinal bacterial enzymes and utilised as substrates for growth and metabolism. The main contributors of fibre to the diet are the cell walls of plant tissues, which are supramolecular polymer networks containing variable proportions of cellulose, hemicelluloses, pectic substances, and the non-carbohydrate components, such as the
phenolic compound lignin (Figure 1). Other sources of fibre in the diet include fructans (e.g., inulins), which are not part of the plant cell walls but are synthesised and stored in the cell vacuole [3,4].

Figure 1. Carbohydrate components of a primary plant cell wall. A cartoon of the carbohydrate components of a primary plant cell wall demonstrating the supramolecular nature of the wall and the diversity of the cell wall constituents which contribute to dietary fibre. The cellulose microfibrils are composed of crystallites which are further composed of cellulose chains. The cellulose microfibrils are stacked upon one another to give strength as the skeleton of the wall. Hemicellulose is thought to keep the microfibrils apart. The nature of hemicellulose present varies considerably between plants. Pectin is a mega molecule, used for water transport throughout the plant. There are various different sections within pectin, the proportions vary between plants. The egg box region is shown here where different strands of pectin are bound together by calcium. There is a high concentration of pectins in the middle lamellae which interact with the neighbouring cell walls [4].

However, there is much that is not known about dietary fibre, in part because the structure of the plant cell wall, which makes up the majority of our dietary fibre, has not been fully elucidated. In turn, the overall structure of the polymers, and how they interact with each other within the plant cell wall, is not yet fully understood [3,4]. Added to this, what occurs to the matrix of the cell wall during chewing (Figure 2) and movement through the digestive tract is not clear [5], and a substantial percentage of dietary fibre is digested by the microbes in the colon. The nature and actions of the microbiome are just beginning to be explore [6]. 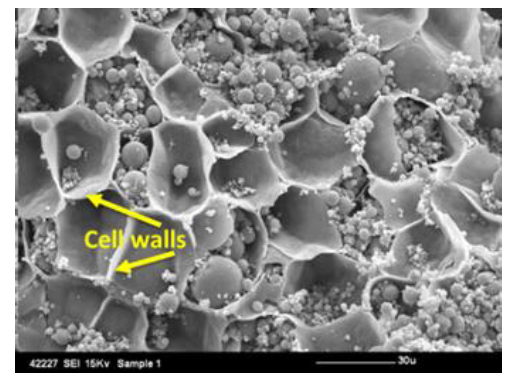 Figure 2. Surface of an almond seed post-mastication showing ruptured cell walls (dietary fibre). Micrograph, produced by scanning electron microscopy, of the surface of a masticated particle of almond seed. The cell walls (dietary fibre) have been ruptured (as marked by arrows) by chewing, exposing the nutrients inside the cells of the almond cotyledon tissue. Many of these cells still contain protein and lipid (oil bodies and coalesced oil droplets), which are potentially available for digestion (i.e., bioaccessible). Nutrients in intact cells below the fractured surface are not bioaccessible because the dietary fibre acts as a physical barrier to digestion. The scale bar is 30μm.

4. Recommendations to the Public and to Health Professionals
It is generally agreed that dietary fibre is an important part of a sustainable, balanced, healthy diet [34]. Consumption of dietary fibre is below the recommended intake levels for optimal health in many parts of the world and may be decreasing. We recommend maintaining or increasing dietary fibre intake to the recommended levels.
We support the Institute of Medicine recommendations for the total dietary fibre of 14 g/1000 kcal/day. We suggest that this should mainly come from intrinsic dietary fibre. Data from cohort studies with intakes beyond this amount are limited, but many traditional societies consume larger amounts and have a lower risk of chronic diseases.

5. Recommendations to the Food Industry
The food industry plays an important role in developing new food ingredients and products that have public health benefits and are also highly palatable. In developing new high-fibre foods, the sensory characteristics are important and will strongly influence whether people consume them. At the same time, if these do not have nutritional benefits then such products would be of little nutritional value, regardless of how technologically innovative they may be. It is important to recognise that increasing the fibre content on the food label does not guarantee any enhanced nutritional benefits in a product.
Recommendations to the food industry would depend on the reasons why particular types of fibre are being added, and how they are processed, given that mechanical and hydrothermal processing can affect their properties. For example, in wheat grain there is an advantage in preserving some of the structural integrity of the cell walls of the starch-rich endosperm, in order to produce flour that is digested more slowly and has a beneficial impact on postprandial glycaemia (23). However, if the health outcome is to improve the iron bioavailability in wheat, then there may be advantages to micro-milling (rupturing) the aleurone cell layer, which has a high iron concentration (28). In producing foods for the general population, the first example would be the most appropriate recommendation while, for populations with nutritional deficiencies, the second recommendation may preferentially apply. Therefore, we generally encourage the food industry to preserve many of the benefits of dietary fibre rich foods by minimising the degradation of the plant cell wall structures and tissue architecture, while maintaining palatability, except in situations of special dietary requirements and specific physiological or clinical outcomes (e.g., the use of prebiotic oligosaccharides and viscous polysaccharides).
Currently, labelling the dietary fibre content of foods in certain countries around the world, including Europe, is not mandatory. This represents a problem for consumers, researchers, and medical staff dealing with patient diets. We support the mandatory use of fibre on food labels.
Labelling should distinguish between fibre that is endogenous to foods and that added as a functional supplement because synthetic or purified fibre will not be accompanied by the micronutrients and phytochemicals in foods and, thus, may not predict the same health outcomes. Functional (or other) supplemental fibre, where permitted, should be listed separately among ingredients. The labelling of dietary fibres could be of the form “FIBRE N g PER 100 g, of which X g is SUPPLEMENTAL”.

6. Conclusions
Dietary fibre and its associated non-carbohydrate components have been inversely associated with disease outcomes. Food labelling should include dietary fibre, and distinguish between intrinsic and purified added fibre, given that the intact plant cell wall may confer benefits beyond fibre isolates.
The labelling of dietary fibre may also help to achieve the recommended intake of 14 g/1000 kcal/day for health benefits. To extend these recommendations, further studies on the interrelation of dietary fibre, prebiotics, and health, which aim to optimise both the health potential of foods and related food processing methods, are advised. This would include how the structures and the 3D matrix, composition, and physico-chemical properties of dietary fibre a ect digestion, gastrointestinal function, and the role of the microbiome.