Human Milk Oligosaccharides: Where Do We Go from Here?

Human milk oligosaccharides (HMO) have no nutritive value, yet mothers spend significant energy for their synthesis. So what do they do? Clinical observational studies together with basic research position HMO as multifunctional innate breastmilk component. They shape the establishing gut microbiota and supposedly help the development of appropriate immune competence.

The early-life gut microbiome establishes and matures sequentially during infancy and early childhood from an aerobic to anaerobic milk-oriented early life microbiome towards an adult like microbiome. Different phases of this maturation process can be characterized by a progression of microbiota communities, starting from Enterobacteriaceae, Streptococcaceae dominated aerobic communities over anaerobic Bifidobacteriaceae dominated communities to increasingly diverse Bifidobacteriaceae and Lachnospiraceae dominated communities. The age-appropriate microbiome maturation is considered important for normal digestive, immune competence and metabolic development (Blanton et al. Science 2016;22:713). Mode of delivery, antibiotic use and diet are probably most influential to this end. (Chart 1) 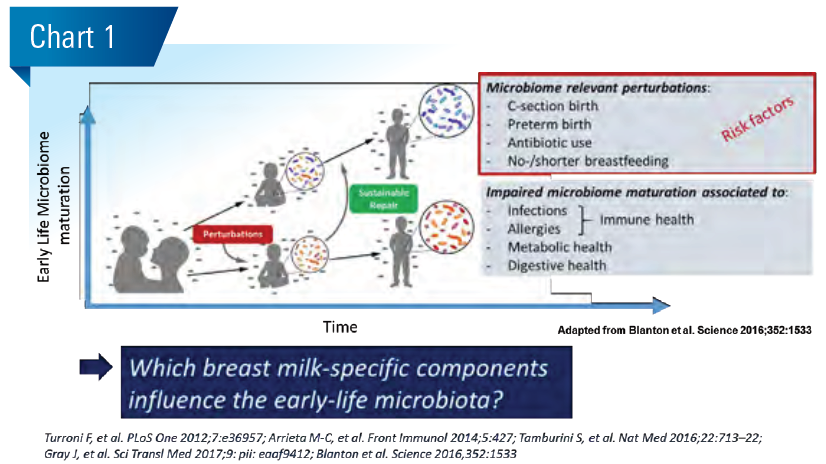 Breastfeeding is associated with a lower risk of gastrointestinal and respiratory infections, and possibly lower risk of diabetes and obesity, while the effect on allergies is less clear (Victora et al. Lancet 2016; 387:475). This suggests that breastmilk-specific components may contribute.

Among such breastmilk specific components are the nondigestible human milk oligosaccharides (HMO), the third largest solid breastmilk component. Chemically, HMOs are elongations of the milk sugar lactose by galactose, N-acetyl-glucosamine, fucose and sialic acid. Most HMOs such as the fucosyl-oligosaccharides are not present in farmed-animal milks and therefore absent from animal milk based nutrition products. In structure and composition the HMO resemble and have identical epitopes like mucosal surface glycans that are at the interface between the mucosal cells and the intestinal microbiome.

In contrast to HMOs, generic prebiotics like Fructooligosaccharides (FOS, inulin) are elongations of the table sugar sucrose by fructose units. These are typical plant storage glycans usually consumed from weaning with the introduction of solid plant based complementary food.

Mothers spend a considerable amount of energy to form HMOs in milk at an estimated 5 to 15 g/L. The HMO composition varies primarily due to the maternal genotype for the Secretor and Lewis gene encoded fucosyltransferases as well as stage of lactation. While most HMOs decrease in concentration with time of lactation, some increase. This means with age-dependent growing milk intake infants consume relatively constant amounts of most HMOs per day and increasing amounts for some. Generally, HMOs are non-digestible and hence have no nutritive value per se. Small amounts of HMOs can go systemic and are mostly excreted in urine, while the bulk of HMOs remains in the gut lumen. (Chart 2) 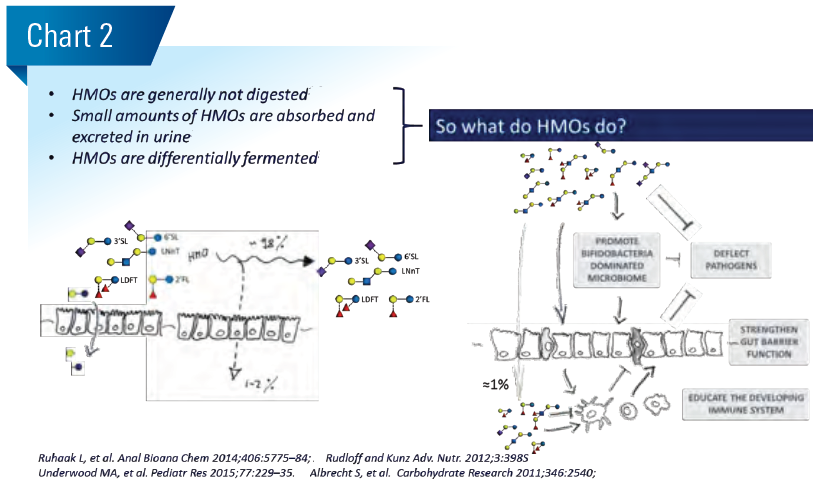 Generally, we base our hypothesis on possible roles of HMOs for healthy infant growth and development on observational clinical association studies. In a first step towards the establishment of causality, we investigate the formulated hypothesis using basic research mode of action models. In a second step, we run randomized clinical intervention trials. (Chart 3) 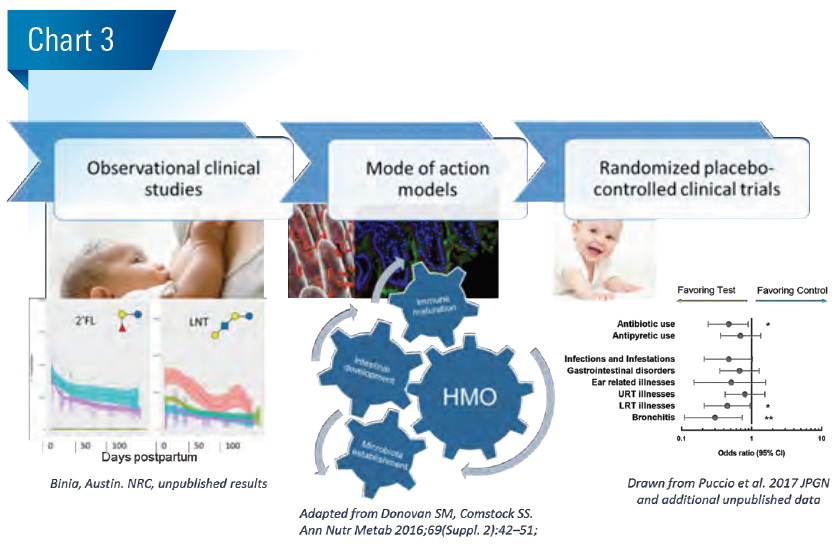 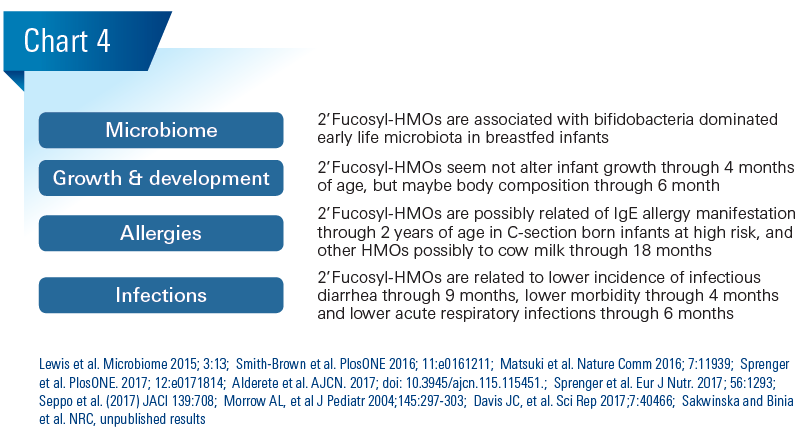 In the gut lumen, HMOs modulate the establishing gut microbiome through the promotion of a bifidobacteriadominated microbiome. Basic research studies identified different bifidobacteria strains that can use HMOs for growth, either after internalization or after extracellular breakdown. Interestingly, specific HMOs also boost the metabolic activity of specific bifidobacteria seen primarily as higher formation of the short chain fatty acid (scfa) acetate that is not necessarily seen with prebiotics that lead to similar growth. Metabolites from the HMO stimulated bifidobacteria provide immune protection from inflammation and pathogen invasion in preclinical models. The bifidobacteria-dominated early life microbiome, likely through its metabolites and acidification of the gut lumen, leads to colonization resistance against the intrusion of new and potentially harmful microbes and thus represents a major intestinal barrier.

Because HMOs modulate the maturation of the early life microbiome and because the microbiome presumably affects food efficiency and energy harvest, variation in HMO composition might affect infant growth and body composition. We did not observe growth differences through 4 months of age in a cohort of 25 boys and 25 girls in relation to 2’Fucosyl-HMOs (Sprenger et al. PlosONE. 2017; 12:e0171814). However, another group observed lower fat mass related with higher breastmilk content of one specific 2’Fucosyl-HMO in a cohort of 25 infants (Alderete et al. AJCN. 2017; doi: 10.3945/ajcn.115.115451). It will be interesting to further study HMO relations to body composition in larger cohorts.

Numerous environmental, including microbiome and nutrition, and genetic factors affect allergies. Among them are breastmilk bioactives, and possibly HMOs. In a cohort of 266 mother infant dyads with hereditary allergy risk, 2’Fucosyllactose (2’FL) concentrations in breastmilk related to lower risk to manifest IgEeczema through 2 years of age in the C-section born infants only (Sprenger N, et al. Eur J Nutr 2017;56:1293–1301). This indicates that 2’FL might have an immune effect via the promotion of specific bifidobacteria that were at lower prevalence in the C-section born infants up to 6 months in this cohort (Kuitunen et al. JACI 2009;123:335). Noteworthy, specific Bifidobacterium breve were related to lower eczema risk and 2’FL related to abundance of specific B. breve strains and their metabolic activity (Pediatric Allergy and Immunology 2016; 27:838. Matsuki et al. Nature Comm 2016; 7:11939). Further, HMOs like 2’FL and another larger fucosyl-HMO (LNFP III) interact with the dendritic cell lectin DC-SIGN, which might modulate immune development. Another group found LNFP III related to cow milk allergy (CMA) at 18 months of age in a cohort of 39 mothers with CMA infants and 41 mothers with healthy infants (Seppo et al. (2017) JACI 139:708). They speculated that LNFP III might have acted via DC-SIGN. In a mouse model on food allergy, 2’FL and the sialyllactose 6’SL were tested and both reduced symptoms via the modulation of mast cell response (Castillo-Courtade L et al. (2015) Allergy. 70:1091).

Because HMOs resemble mucosal glycans and largely escape complete fermentation, they can act as soluble decoys preventing pathogen adhesion to mucosal cells. Besides glycans the mucosa and immune cells are also rich in lectins (glycan binding proteins) and some were shown to bind specific HMOs. Examples are DC-SIGN, galectins and Siglecs. Whether observed changes in epithelia and immune cells upon treatment with specific HMOs is mediated via such lectins remains to be shown. Together, such proposed mechanisms including the aforementioned colonization resistance and importance of the microbiome for immune development suggest that HMOs contribute to protection from infections in the gastrointestinal tract and likely at other mucosal sites such as the respiratory tract.

Recently, we observed an association between 2’Fucosyl- HMO positive milk and a 1.4 times reduced risk of acute respiratory infections during the predominant breastfeeding period through 6 months of age in a cohort of 220 mother infant pairs in Bangladesh (Sakwinska and Binia et al. NRC, unpublished results). We currently further investigate etiology. From preclinical models there is data indicating that specific HMOs might block adhesion of respiratory pathogens and that HMOs, among them 2’FL, modulate immune response to influenza virus infection and immunization (Sprenger, et al. NRC, unpublished results; Xiao, et al. Frontiers in Immunology 2018. 9:452). Whether the connection between the gut and the lung is mediated by specific microbial metabolites like the scfa or trafficking immune cells as proposed from studies in mouse models has to be established still for HMOs.

Together, such clinical observations corroborated by experimental basic research data suggest that HMO act in a multifunctional way, affecting the (i) establishment of the early-life microbiota dominated by bifidobacteria, (ii) resistance to pathogens and (iii) mucosal barrier and immunity. Interestingly, several basic research models indicate that specific HMO may not only modulate the gut-lung axis, but also modulate brain and cognitive development, via the gutbrain axis. 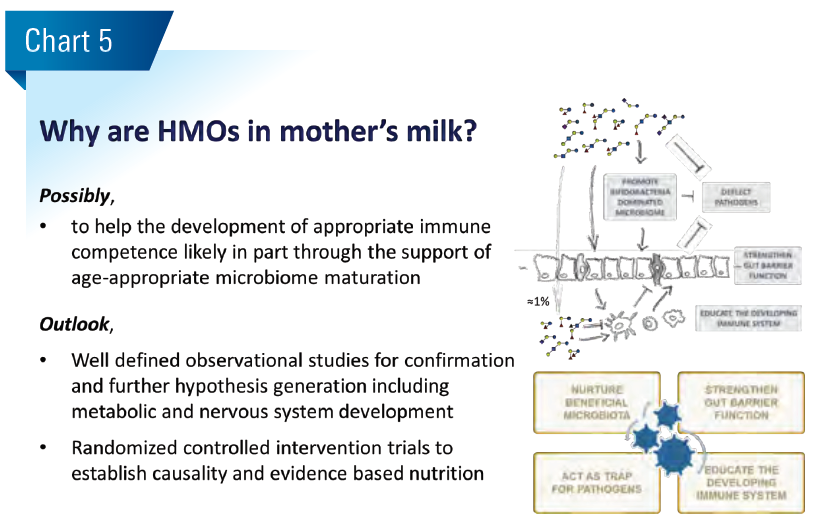