Cognitive impairment is considered one of the greatest challenge for health and social care in the XXIst century. Due to reduction of premature death and increasing life expectancy, the prevalence of cognitive impairment is expected to increase both in high income and medium-low income countries. The most severe form of cognitive impairment is dementia. Although some epidemiological studies found a reduction in dementia incidence, particularly in high income countries, the increase of the number of older subjects suffering from this condition will continue in the near future. Therefore, it is extremely important to try and prevent or slow down the onset of dementia. Several risk factors have been identified whose reduction during the life course might contribute to achieve this purpose. While age, sex and genetic predisposition cannot be modified, other risk factors should be properly addressed. Among them less education, hypertension, hearing impairment, smoking, obesity, depression, physical inactivity, diabetes, and low social contact, excessive alcohol consumption, traumatic brain injury, and air pollution (Figure 1)

However, it should be pointed out that the majority of subjects do not develop dementia acutely but rather they experience a decline in cognitive functions before the onset of
overt dementia. 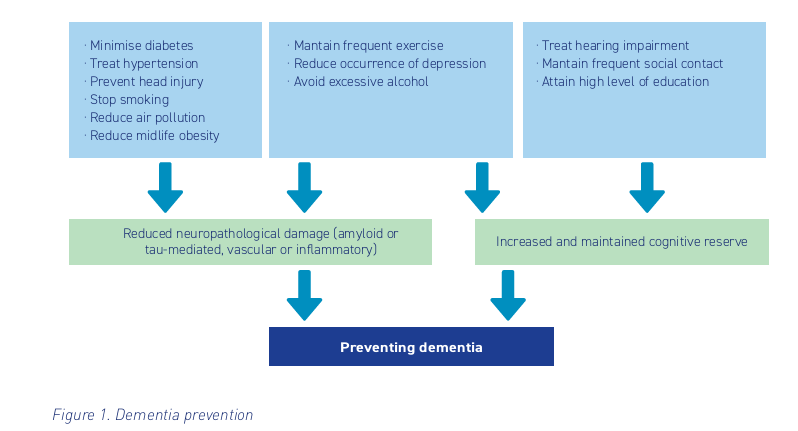 Mild cognitive impairment (MCI) is a clinical syndrome, which is characterized by an objective decline of cognitive functions, documented on neuropsychological tests, which is greater than expected considering the subject’s age and education level, but does not impair the ability to perform activities of daily living. Most importantly, MCI is associated with a higher risk of experiencing cognitive and functional decline, although not all subjects with MCI will progress to dementia. The epidemiology of MCI is not well known, since different studies provided variable figures, in view of the heterogeneity of populations, diagnostic tools and criteria. It is however well established that the probability to develop MCI increases with age. Therefore, MCI is mainly affecting older subjects. The prevalence increases from 6.7% at the age 60 to 64 years up to 25.2% in the age group 80 to 84 years. (Figure 2). Moreover, it is very likely that MCI is underdiagnosed, since in many instances older age is considered the cause for cognitive deficits by older subjects, their family members and even their physicians.

Although several studies investigated potential therapeutic interventions in subjects with MCI, there is currently no authorized pharmacological intervention to improve cognitive functions or prevent the progression of MCI to dementia. Analogously, there is no dietary agent that has demonstrated efficacy in the treatment of MCI. Nevertheless, in view of the fact that nutrition has a paramount role in healthy and cognitive aging, nutritional interventions have attracted considerable interests and their potential benefits have been evaluated in MCI patients. Until now, there is insufficient evidence that whole diets or specific dietary compounds improve cognitive outcomes in patients with MCI. The current symposium will present the latest studies concerning a promising dietary treatment, i.e. the use of a ketogenic intervention to improve cognitive performance in subjects with MCI. The rationale underlying this approach as well as the results of a clinical trial will be presented and discussed today by renowned experts in the field. The first speaker will be Prof Robin Williams, working at the Centre for Biomedical Sciences, School of Biological Sciences, Royal Holloway University of London, The United Kingdom, who will elucidate the mechanisms underlying the beneficial effects on cognition of ketogenic medium chain triglycerides. The second speaker will be prof. Bernard Cuenoud, PhD, working at the Aging and Energy Metabolism, Translation Research, Nestlé Health Science, Lausanne, Switzerland and, as adjunct Professor, at the Faculty of Medicine and Health Sciences, Sherbrooke University, Canada, who will present a clinical trial evaluating the effects of a ketogenic supplement on cognitive functions in patients with MCI.

It is clear brain energy glucose metabolism is about 10% below normal in Mild Cognitive Impairment (MCI) and deteriorates further in Alzheimer disease and an alternative energy source for brain cells (neurons and astrocytes) is needed. Medium chain triglycerides (MCTs) consumption, without stringent dietary restrictions, has recently been shown to give rise to mild ketosis, in addition to elevating levels of specific medium chain fatty acids, 60% octanoic and 40% decanonic fatty acid (kMCT) because of their rapid absorption and oxidation, and produce ketones and lactate which brain cells are able to use as an energy source. Figure 1 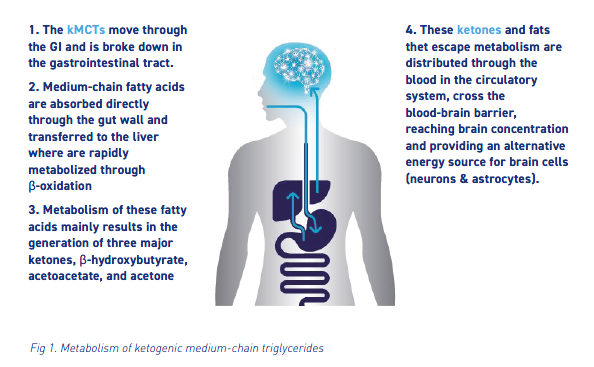 In the treatment of MCI, a range of mechanisms have been proposed for these kMCTs. These mechanisms include the well-accepted process of energy provision to neurons, restoring that lost through reduced glucose metabolism. In addition both ketones and decanoic acid function to elevate the number of mitochondria in cells, again providing improved energy supply to the brain cells. Furthermore, a range of other therapeutic mechanisms have been recently identified, including adenosine-dependent effects, the reduction of reactive oxygen species (ROS) production, the prevention of cell death (neuroprotection), signaling effects such as the inhibition of mTORC1, and the reduction of over-activated synapses through the inhibition of AMPA receptor activity. All of these processes may contribute to the treatment of patients with mild cognitive impairment. This presentation will briefly outline these mechanisms, to provide an overview of potential effects of kMCTs in the treatment of mild cognitive impairment.

1 out of 6 people aged 65 and above experiences a decline in memory and thinking ability that exceeds the level expected due to aging: a condition which is referred to as MILD COGNITIVE IMPAIRMENT (MCI). Over 50% of MCI patients progress to Alzheimer Diseases over 5 years, and there is no drug approved to treat MCI. New science paradigm suggests that the decline in brain glucose metabolism is causal to dementia progression, and that ketones, the brain’s main alternative fuel, can rescue the brain energy deficit. Importantly, early intervention in dementia might slow the disease progression. Supporting this view, it has been demonstrated that the decrease in brain glucose metabolism is strongly associated with a decrease in cognitive decline. This correlation is much stronger than the one observed between the increase in brain amyloid protein deposits and the decline in cognition in MCI and Alzheimer’s (AD) patients. This suggest that brain glucose metabolism is a superior indicator of cognitive performance compared to amyloid protein aggregation in Alzheimer’s Disease and Mild Cognitive Impairment. Here we report that an oral nutritional supplement containing a ketogenic medium chain triglyceride (kMCT), BrainXpert Energy Complex, improved cognitive performance over 6 months in MCI patients. The Brain Energy, Functional Imaging, and Cognition (BENEFIC) randomized controlled trial demonstrated that the BrainXpert Energy Complex increased blood and brain ketones, and improved cognition in MCI participants. Improvement in cognition was associated with blood ketone level. While the improvement in performance on the free recall test is predictive of AD diagnosis, the impact on transition from MCI to AD or on the delay of onset remains to be established. New analysis of the white matter fibers (neuron) revealed that the ketone cerebral metabolic rate was increased by about 2 fold by kMCT and correlated with an improvement in processing speed abilities, suggesting that ketones may have a role in myelin integrity in MCI. A secondary data analysis to investigate changes in cardiometabolic markers and peripheral inflammation during the 6-month intervention revealed that kMCT have a minimal effect on an extensive profile of circulating metabolic, fatty acid and inflammatory markers as compared to a placebo calorie-matched drink, supporting the safety of kMCT supplementation in elderly with MCI. These results provide robust support for the concept that brain energy rescue with ketones such as kMCT can improve cognitive outcomes in elderly MCI. Longer clinical studies will determine if a keto-therapeutic intervention can slow disease progression toward AD during the MCI phase.