When is it time to introduce solid foods?

When is it time to introduce complementary feeding? What are the recommendations? Starting complementary feeding too early increases the risks of allergy. On the other hand, introducing solid food too late also contains risks. All those questions and even more are being explained in this interview with Professor R. Shamir.

When is it time to introduce complementary feeding? What are the recommendations? Starting complementary feeding too early increases the risks of allergy. On the other hand, introducing solid food too late also contains risks. All those questions and even more are being explained in this interview with Professor R. Shamir. 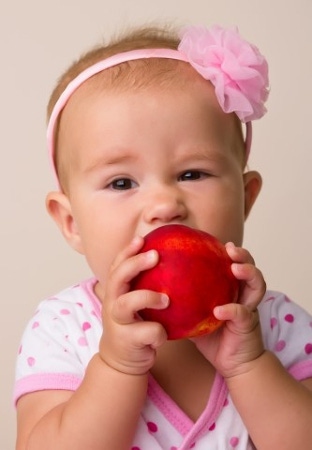 When an infant is born is breastfed. When is it time to start up complementary feeding?

What is the recommendation of the scientific society?

The recommendation is exclusive breastfeeding for a period of six months although we know that in some developed countries even four months exclusive breastfeeding might be also okay. It's true also that during the last year the new Cocker review shows some benefits of exclusive six months versus four months, but it could be that starting complementary feeding at four months would be okay, as long as you introduce solids that will not reduce the amount of breastfeeding and these depends also on the maturity of the child his ability to get the food both from cognitive perspective but also from his motor skills.

This is the recommendations, what is the reality in the world?

How many mothers are really exclusively breastfeeding until six months? Do we know that?

The reality is much less than what the recommendations are.

I would put it in two parts, the first is the mother wishes - when a study that was just published this year looked at women what their expectations are, didn't say whether it should be four months or six months or whatever. They asked the mothers how much time do you want to breastfeed? Exclusively breastfeed your child? And they gave different numbers around three months. The thing is that only 30% of the mothers have lived up even to the time that they were thinking they would breastfeed.

Let's talk about local cultural habits, we always think we have one global standard in the world to recommend vegetables, fruits, cereals but they're different cultural habits in the population. A certain populations are using non milk liquids from the age of two, three weeks onwards because it has been a tradition. Is there a disadvantage if this is done?

There is a disadvantage if complementary feeding is started before the age of four months. It is disadvantage from an allergy perspective. There are studies showing that if you exposed children to complementary feeding before the age of three months you increase the risk of allergy. For gluten for example you increase the risk of the diabetes in high risk population. Sometimes it's also a problem of nutrition we have in my country for example people are using juices of rice. It's rice its painted with white so they call it rice milk, but it is no calcium it has no additives that in the tradition of people they're using this rice milk as a milk so it's not even cow's milk. So there are also nutrition disadvantages of heavy complimentary feedings before the age of three months not only allergy.

So there is a risk if you start up too early? On the other hand, when the first tooth is erupting, Mother Nature is telling us it's time to eat something else and this happens in some children that age five months in others seven months. Is there a risk if you introduce solids too late? Let's say if you exclusively breastfeed until nine or twelve months.

Some of the risks are evidence-based some of them are more a belief and are not proven. The ones that are not scientifically proven, but clinically with think are solid are the fact that children should go to the stage where they learn to accept other foods and it would be inappropriate just to continue to suck milk and not start getting foods. Whether this will have an effect on later acceptance of food is a question although there are studies showing that when you're exposed at the age of six to seven months to vegetables you will accept vegetables better when you're seven years and if you do it while breastfeeding it also has an advantage, so this is one thing that we would like to see.

The other is from the nutritional aspect, because if you continue to only be exclusively breastfed you will not have enough nutrients, not calories not trace elements, not vitamins. So you need this adaptation to solids in order to get your nutrition values and lastly also delayed introduction of other allergenic foods is related to more allergy.

So both early and late are a problem.

Are there any risks in terms of food safety? Breast milk is something which is very safe. But then the baby is exposed to different types of foods and I assume that you are not only giving one type of food, you introduce one and then the next. Is there any risk which the mother can avoid?

There are risks that the mother can avoid I think it comes in few levels:

• Now I'm coming to the second level. You have to peel the apple, you have to cut very thin, because there is a risk of choking in children. You need to take off the skin of the meat, because of its fat content. You need to have safety rules at home that you don't take meat outside of the refrigerator, leave it for I don't know how much time. You bring it back to the refrigerator after you cooked it, but it was too long then you have bacteria inside. So there are safety issue from that perspective too. And all these things should be exercised at home.

There are certain populations in the world which are starting up with cereals. Is there anything you would like to comment if the cereals are fortified are they adequate?

This is a very good question and I think when we see the studies that we don't see any difference with supplementation versus those without. You ask yourself whether this is really necessary or replaces the need for vegetables and a variety of food. But I don't see danger in that and at least in one aspect countries that have fortified cereals with iron in those countries there were high cereal consumption they were able to fight the iron deficiency by supplementing iron. So this comes to another aspect I think that in each country in each continent or whatever each cultural pocket I would call it, if you fortify the foods with those elements that are deficient in the diet this is one way of combating it. I'll give you an example from our country we're using water at the salted water, so you have low magnesium I mean it's a big problem of losing everything that is in water. Now you need to fortify it you need to find the food items that that if you supplement those the magnesium in and other things like the folic acid that we wanted to do then it is beneficial only if it is done on food items that and on one hand you will not get toxic levels in nutrients that have toxic thresholds and on the other hand will make a difference because in my country for example cereal consumption is not that high. So if you decided that's where you go you may not target your population.

Usually not, although there are some instances for example people have put for young children higher threshold for vitamin D of 1000 units. So you don't want to go above it there are questions whether if you have too high folic acid levels these could have not for children, but for older people could have detrimental effects. It plays a different role in various stages of cancer so there is a hypothetical risk also on masking but that's a different question.

I usually tried to work with families on having a variety of food and in that case no supplementation is needed. So the natural ways is better.