It is well established that poor diet is a major contributor to many conditions including cardiovascular disease, obesity, type 2 diabetes, dental caries, and some cancers. The sheer number of individuals affected suggests that new intervention strategies must be employed to reach large segments of the population, and in particular, the most vulnerable populations with the highest rates of disease. Changing the food environment to provide more healthful, affordable, accessible foods is an effective and feasible strategy for improving the nutritional health of the population and reducing disparities. In addition, there is increasing evidence that changing the local food environment can be a determinant of population weight status [1].
Underlying food environment changes to improve the nutritional health of the population is healthy food access. This includes both increased access to healthy foods and reduced access to less healthy foods. The community strategies deemed most likely to improve the nutrition and health of the population are interventions to alter food and beverage pricing and interventions to change the availability of healthy foods in nutrition assistance programs [2]. Changing the food environment in the retail food sector is a third community strategy that is promising.

Strategy 1. Reducing access to less healthy foods and beverages through the use of food and beverage taxes

Food and beverage taxation addresses the affordability dimension of food access. Current interest is particularly high in implementing sugar-sweetened beverage taxes to reduce consumption of less healthy beverages as they have been demonstrated to be associated with serious health issues such as obesity, type 2 diabetes, and cardiovascular disease. Countries around the world have implemented beverage taxes beginning decades ago [3] (Fig. 1). The data from evaluation studies in Mexico and Berkeley, California have documented significant reductions in sugar- sweetened beverage purchases. In both these studies, reductions in purchases were particularly high among lower income households. Early results from a study of Philadelphia’s relatively recent beverage tax found significant reductions in the consumption of soda and energy drinks, as well. While the primary benefit of a beverage tax has been to decrease consumption, revenue generation can be employed to support government programs linked to community health and education. Further, beverage taxes have contributed to the current movement to increase water consumption and ultimately, may contribute to the reformulation of sweetened beverages. 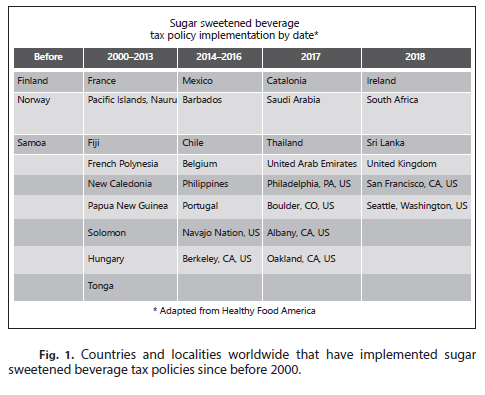 Some government food programs such as the school lunch program and the WIC have found that regulating the kinds of foods offered in the programs can positively affect the diet quality of program participants. The charitable food system comprised of food banks from across the United States is estimated to serve one out of seven Americans every day. Food banks have redirected contributed foods to the poor without regard to nutrition guidance until recently. Now with a better understanding of the food preferences of the users of the charitable food system [4] and a better understanding of the benefit of nutritious food provided in this set- ting with the control of disease [5], food banks are making great strides in changing food offerings (Fig. 2). Feeding America, a non-profit organization supporting the charitable food system, has developed new nutrition guidance for food banking which is presently being adopted by food banks across the nation. 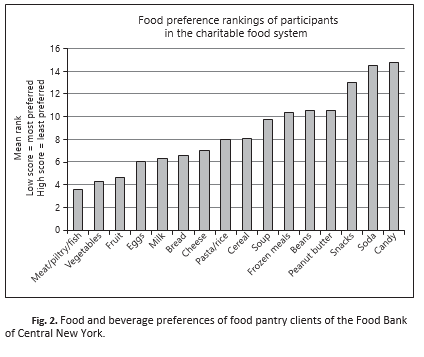