In addition to regions where vegetarian and vegan diets have a long cultural- and religion-based tradition, these diets have recently become more and more prevalent in Europe and other western countries. Furthermore, it is estimated that the prevalence of vegan-nourished adolescents and adults in Western Europe countries ranges from around 0.2 to 3% [1]. Reliable population-based numbers on vegan-fed infants and young children are as yet not available.

In young children and adolescents, not only their weight and growth but also their psychomotor development is strongly influenced by the form and quality of their nutrition. In adult cohorts, a plant-based diet shows an advantage in the prevention of chronic diseases such as obesity, type 2 diabetes, cardiovascular diseases, and certain cancers. As yet, there is no clear evidence that a vegan diet started early in childhood brings a lasting health benefit [2]. However, health reasons are seldom the primary motivation for a vegan diet, whereas ethical-moral or sustainability considerations figure more prominently. This is important to realize as differing assumptions and concerns between the pediatrician and the involved family can lead to barriers in finding a common ground for communication and therefore for long-term follow-up.

Plant-based nutrition is characterized by rich coverage of β-carotene, vitamin C, folate, and magnesium as well as of fiber and phytochemicals. Several of the expected health effects are attributed to the latter. On the other hand, a diet that completely dispenses with products of animal origin can be potentially critical in terms of protein quality and inadequate energy, long-chain fatty acids, iron, zinc, vitamin D, iodine, calcium, and especially vitamin B12. Deficiencies in these nutrients can lead to severe and sometimes irreversible developmental disorders. Awareness of these potentially critical nutrients allows parents who plan a vegan diet for themselves and their children to choose a considered selection of adequate food products. However, even with a well-balanced and optimized variety of vegan food sources, it remains mandatory to supplement vitamin B12 and vitamin D as a minimum [3]. 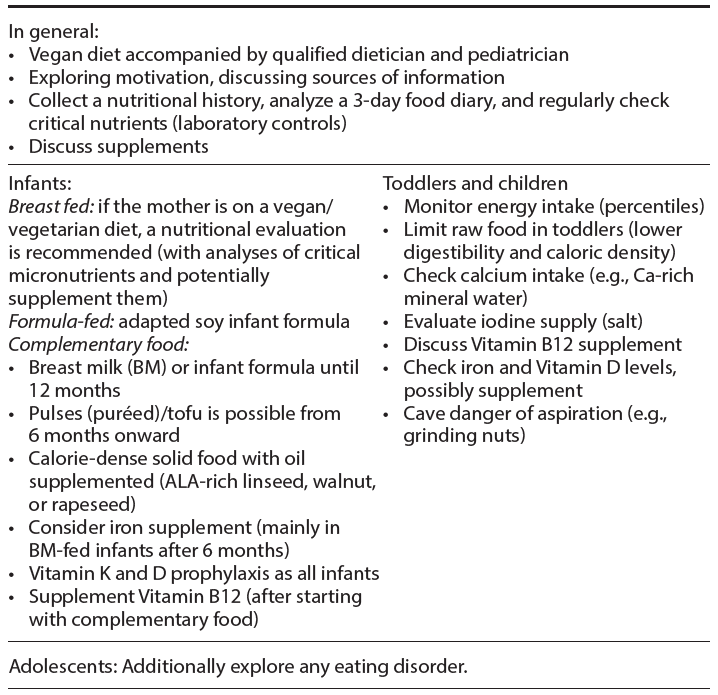 There are significant differences between the recommendations of the various nutrition and health associations worldwide, which, in turn, are probably due to the paucity and heterogeneity of available studies. The American Academy of Nutrition considers a well-balanced and well- planned vegan diet to be a healthy option in each stage of life [4]. However, European professional societies such as the Swiss Federal Commission for Nutrition, the German Society for Nutrition and the European Society for Pediatric Gastroenterology, Hepatology and Nutrition (ESPGHAN) do not recommend a vegan diet during childhood [1, 5, 6]. If such a diet is chosen for ethical, ecological, or health reasons, a well-planned, diversified diet, with additional supplementation of vitamin B12, D, iodine, and potentially other micronutrients, is crucial to ensure a healthy and nutritious intake during childhood. The younger the child, the more critically we need to be aware of the potential dangers of a restrictive diet to the growing individual and therefore primarily advocate a diet that does not need to be supplemented [1].
At any age, a vegan diet requires profound nutritional knowledge from the parents and regular laboratory testing for the child. Qualified nutritional counseling and continuous pediatric medical support are indicated when feeding a child a vegan diet. A summary of aspects that need to be considered in the different age groups is shown in Table 1.