The link between poor maternal nutrition and suboptimal infant and child outcomes is well established, but underlying mechanisms are not well understood [1]. Modifications to the developing offspring epigenome (Fig. 1) are a plausible mechanism for the transmission of intergenerational signals that could extend to effects of paternal nutrition mediated by epigenetic modifications in sperm.

One widely studied epigenetic mark involves the addition of methyl groups to DNA. DNA methylation (DNAm) marks are faithfully copied across cell divisions and can influence gene expression without altering the underlying DNA sequence. DNAm plays a key role in establishing and maintaining cellular identity. The DNAm must, therefore, be extensively remodeled in the very early embryo where embryonic cells are first reset to a pluripotent state, prior to the establishment of cell type-specific marks following separation into the embryonic germ layers at gastrulation.

This has focused attention on the periconceptional period as a time when the establishment of epigenetic marks in offspring might be especially sensitive to differences in maternal (and potentially paternal) nutrition [2].

Some of the landmark work in this field has featured so-called “natural experiments” such as the Dutch Hunger Winter, where offspring were subject to short-lived but severe periods of nutritional challenge in utero [3]. Our work in a rural population in The Gambia in Sub-Saharan West Africa exploits another natural experiment, whereby fluctuations in energy balance and maternal nutrition exposures show a distinct bimodal pattern corresponding to dry and rainy seasons. We have shown, for example, that season of conception and blood levels of certain nutritional biomarkers in maternal blood plasma predict DNA methylation in infants at a number of metastable epialleles (MEs) – genomic regions where methylation is established stochastically in the early embryo [4]. 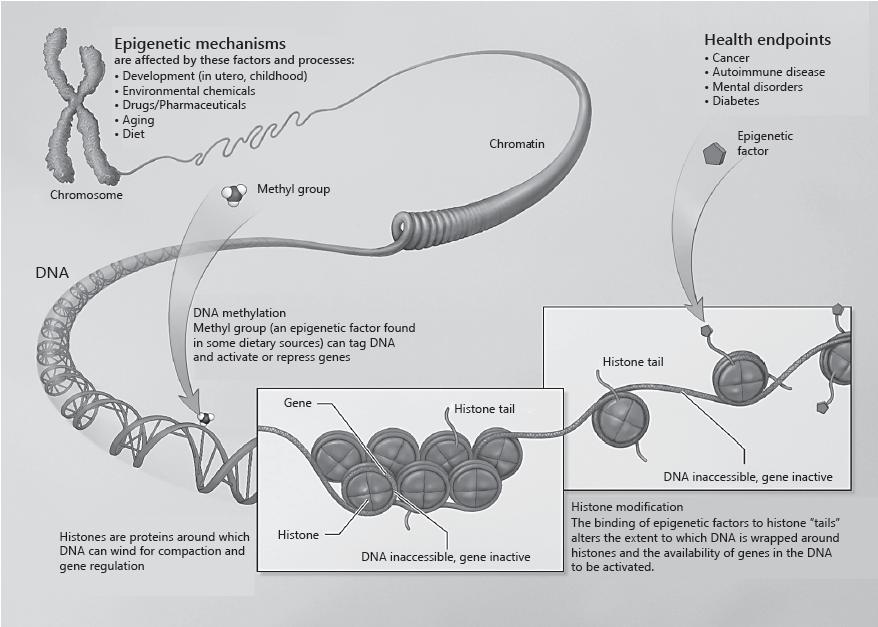 Some MEs have been linked to health-related outcomes, including a region in the POMC gene that is associated with obesity in children and adults [5]. The POMC gene is involved in the regulation of appetite, and evidence that POMC methylation is established in early life, is stable thereafter, and is associated with POMC expression positions this locus as a strong candidate for mediating links between early-life nutrition and the regulation of bodyweight in later life.

As with the studies described above, much of the work in human nutritional epigenetics focuses on the potential for DNA changes to mediate “intergenerational” signals, that is, methylation changes that arise as a result of direct exposure of the embryo or fetus to maternal factors. Intergenerational epigenetic effects potentially additionally encompass exposures in the paternal and grandmaternal generations since germ cells that give rise to the current generation could have been exposed in utero (Fig. 2).

There is a great deal of interest in the possibility that epigenetic signals might also be transmitted across multiple generations – so-called transgenerational epigenetic inheritance. This would require epigenetic states to be maintained across epigenetic reprogramming events at conception and in primordial germ cells during gestation, but evidence for this is currently lacking in humans.

It is interesting to speculate whether epigenetic marks that are responsive to early maternal environment could have evolved to sense, record, and adapt the organism to its anticipated postnatal environment. This would require that environmentally responsive loci are under genetic control. Importantly, this might lead to disease through maladaptation, where there is a mismatch between the early environment encountered by the developing embryo and that experienced in postnatal life.

3. Tobi EW, et al: DNA methylation as a mediator of the association between prenatal
adversity and risk factors for metabolic disease in adulthood. Sci Adv
2018;4:eaao4364.