Global Landscape of Malnutrition in Infants and Young Children

Malnutrition during the first years of life has immediate adverse health consequences and impairs long-term health and capacities [1]. Children born small and those who become undernourished in early life are at higher risk of dying and are more susceptible to illness. Poor linear growth – stunting is associated with several physical and cognitive con- sequences and affects over 150 million children worldwide, one-third of whom live in India. Over 50 million children are wasted, half of whom live in South Asia, yet 5.4 million of the world’s 38.3 million overweight or obese children also live in South Asia. There is growing evidence that overweight in early life may be associated with the risk of noncommunicable diseases later in life.

The global prevalence of stunting fell from 32.6% in 2000 to 22.2% in 2017, with substantial variability in that reduction by region over the same period (Asia: 38.1–23.2%; Africa: 38.3–30.3%; Latin America: 15.9–9.6%) and dramatic progress in a few countries, for example, Nepal (57.1–36.0%) and Lesotho (52.7–33.4%) [2]. The prevalence of overweight in children varies substantially by region, as do the trends in prevalence from 2000 to 2017, which increased globally. The greatest rate of increase was Eastern Europe and Central Asia (8.2–14.8%) and only West and Central Africa saw a decline from 4.3 to 3.0%. If current trends continue, 70 million children will be overweight or obese by 2025. While these global, regional, and national statistics are critical for tracking progress and to inform policy and program priorities, specific actions to address them should be informed by more disaggregated data to understand which populations are most affected and the causes. For example, in India, the prevalence of stunting when disaggregated by district ranges from 12.4 to 65.1% [3]. Analyses from India, Indonesia, and Vietnam suggest that the determinants of stunting vary by geography within countries.

This variability should not be surprising given that all forms of undernutrition in early life have a complex etiology including factors at the individual, household, and societal levels. A conceptual framework of stunting that builds on those developed previously by UNICEF and more recent evidence on determinants of healthy growth is shown in Figure 1. 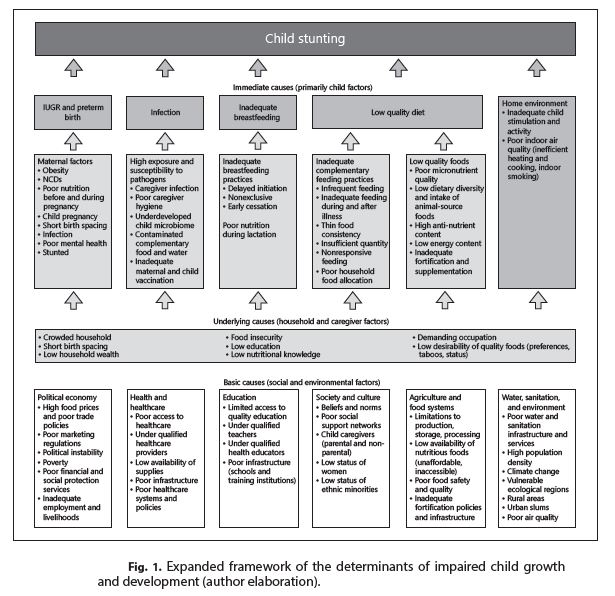 Returning to the India example, factors that explain the diversity in prevalence include geography (higher in the north and center), house- hold-level factors (assets, household size), maternal factors (care during pregnancy, body mass index, age at marriage, education), as well as child factors (adequacy of the diet) [3]. All factors explained 71% of the variance in stunting prevalence, meaning that 29% remains unexplained by the included factors. Exploring additional determinants such as those articulated in Figure 1 could provide further insights into stunting causation and its diversity within and among countries.

For decades the prevalence of anemia has been used as the sole indicator of micronutrient malnutrition in global tracking. Yet anemia, like stunting, has a complex etiology and numerous nonnutritional causes. Unfortunately, other indicators of micronutrient status are rarely collected at the national level. There is an urgent need for rigorous data collection that is nationally and subnationally representative, regularly collected, and standardized across countries so that policy and programs can be tailored to effectively improve all forms of malnutrition.