Environmental and Physiological Barriers to Child Growth and Development

Aggregated analyses of child growth in low-income countries reveal a remarkably consistent picture of serious growth failure compared to the WHO reference growth curves. Birth weight is generally lower by 0.5–1.0 Z-score. Young infants then grow reasonably well until about 3 m postpartum when they enter a period of precipitate decline compared to the WHO reference to reach –2 Z-scores and worse. By 24 m this decline halts and, in many settings, there follows a period of gradual catch-up (Fig. 1). Low birthweight can be ascribed to numerous factors, especially small maternal size, which reflects the environmental effects in prior generations. Possible epigenetic mechanisms that might mediate these intergenerational effects are discussed by Silver elsewhere in this symposium.

A large proportion of the rapid growth deterioration in later infancy and the second year of life can be ascribed to infections and the wider nonspecific effects of living in an unhygienic environment. Despite never revealing themselves as clinical syndromes, the great majority of children in rural African settings are antibody positive to numerous pathogens (CMV, EB, HepB, H. pylori, and many more) by 24 m; these infections must take their toll.

Additional to these is a syndrome widely termed environmental enteric disease (EED) that combines gut leakage with a chronic inflammation leading to nutrient losses and cytokine-mediated growth retardation [1, 2].

The etiology of EED is still not entirely clear and probably results from a constellation of factors all related to poverty and pooled under the label of water, sanitation, and hygiene (WASH). Pathogens causing diarrhea play a contributory (though not necessarily dominant) role [3]. Alterations in the gut microbiota reflecting an inappropriately slow maturation toward the normal post-infancy profile [4] and/or a frank dysbiosys [5] each may play an additional role (Fig. 2). 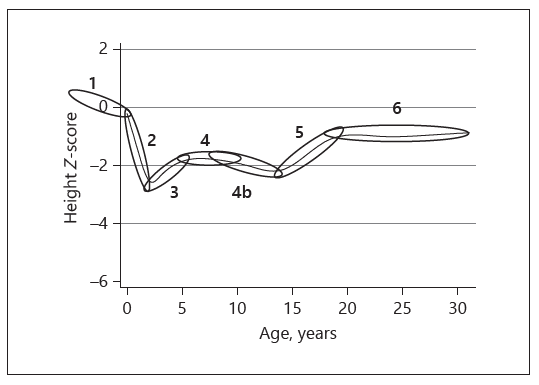 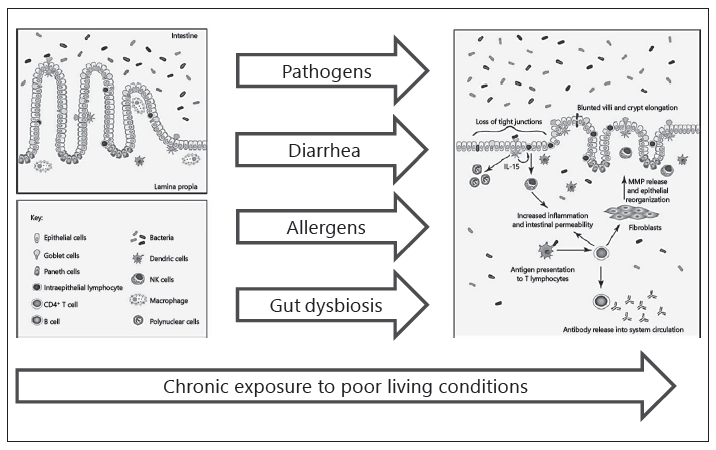 Micronutrient deficiencies, and especially iron deficiency leading to anemia, are also caused in some part by infections and inflammation that impair both their absorption and utilization.
The rapid decline in stunting and anemia rates seen in many South American countries in the past 3 or 4 decades has been well documented in Brazil where it seems clear that concerted efforts involving improved water and sanitation facilities, improvements in breast-feeding rates, poverty reduction, and mothers’ education have all contributed to the excellent progress seen. In contrast, the disappointing effects of recent WASH intervention studies (presented in this symposium by Humphrey) emphasize the need for holistic approaches that encompass a wide range of environmental improvements in addition to nutrition-specific interventions.