Balancing Safety and Potential for Impact in Micronutrient Interventions

Almost 300 million children under 5 years are anaemic worldwide [1]. Iron deficiency has traditionally been considered to account for half of these cases. International policy makers recommend universal distribution of iron-based interventions – either iron supplements or iron-containing multiple micronutrient powders to alleviate the burden of anaemia in young children. More recent analyses indicate that the burden of anaemia attributable to iron deficiency is less than originally anticipated.

When considering whether to implement universal iron interventions, it is essential to benefit putative benefits from these advantages with possible risks. Efficacy trials indicate that MNPs reduce the prevalence of anaemia by an average of 34%. Recent effectiveness studies have indicated that the impact of MNPs on anaemia may be even smaller. The key reason for deploying iron interventions in young children to reduce anaemia is to improve child development, well-being and growth. However, few randomised controlled trials of iron interventions have carefully measured these outcomes. Presently, there is inadequate evidence to support the hypothesis that universal iron interventions (either as iron supplements or multiple micronutrient powders) provide benefits on functional child health such as child development [2], growth, or well-being.

Conversely, several important randomised controlled trials have found that when universal iron interventions are given to all children in a population, they might increase the risk of infection, particularly malaria and diarrhoea. Populations with highest burdens of anaemia are the same that harbour high rates of these infections. Concerningly, in malaria endemic regions, iron interventions (either as supplements or micronutrient powders) increased serious adverse events [3]. Iron may exacerbate risk of malaria by producing a reticulocytosis; these young red cells are more susceptible to parasite invasion [4]. The mechanism by which iron increases risk of diarrhoea may be via reprofiling the intestinal microbiome in favour of pathogenic species [5]. 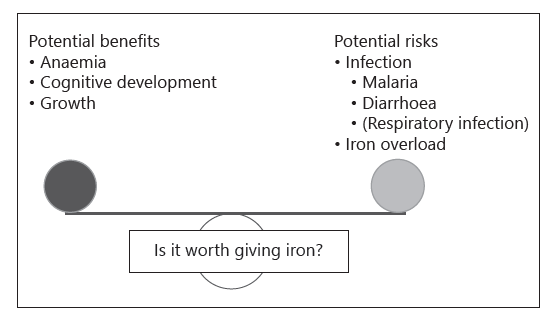 Other possible risks of iron interventions have not yet been extensively described. Iron overdose induces marked gastrointestinal and systemic toxicity, and even small doses of iron can be lethal to small children. Universal iron distribution programmes to infants or adults results in large numbers of doses of iron in households across a population and is largely unsupervised. The incidence of iron toxicity in these populations is presently undocumented but should be considered when monitoring programmes. Finally, in some populations, carriage states or subclinical inherited red cell disorders may increase iron absorption from the diet or from supplements. Long-term provision of iron interventions (including fortification) may, in some cases, raise the risk of iron loading.

Identifying whether universal iron interventions provide a net benefit or harm to populations is challenging (Figure 1). Utilising a burden of disease approach, iron deficiency anaemia exerts far fewer disability- adjusted life years worldwide than either malaria or diarrhoea; thus, modest relative reductions in the burden of iron deficiency that come at a cost of small increases in relative burden of malaria or diarrhoea would likely produce a net harm to health. Crucially, the quality of evidence for both iron supplements and MNPs remains very low, with few high-quality trials having been performed, which address crucial outcomes. This situation should improve with 2 large trials in progress in Bangladesh and Malawi that will specifically define the evidence for functional benefits from universal iron interventions (MNPs and iron supplements), enabling these interventions to be compared to each other as well as to placebo for key outcomes including child development, well-being, growth, and haemoglobin and iron status. Until then, implementation of universal iron intervention programmes should be undertaken with caution.