Background
The concept of prebiotics has received much attention during the last decade. Prebiotic oligosaccharides (PBOs) are discussed to have various health ben­efits mainly due to an influence on the colonic microbial composition or activ­ity [1–3].

During the last 5 years, research on human milk oligosaccharides (HMOs) has developed into one of the “hottest” topics in infant nutrition, especially due to the enormous progress in producing some of these components on a large scale (Fig. 1). Today, some HMOs can be added to infant formula or used for other purposes. Therefore, we are at the beginning of a new era in infant nu­trition [4].

In the following, a few basic ques­tions will be addressed.

What Are “Prebiotics”?
The first definition was published in 1995 by Gibson and Roberfroid [5]: “Prebiotics are nondigestible food in­gredients that beneficially affect the host by selectively stimulating the growth and/or activity of one or a lim­ited number of bacteria in the colon that
can improve host health.” Although this definition has been modified over the years, it has not been possible to phrase a more specific description [2]. This, however, would help to clearly describe “a prebiotic effect in infants.” A most re­cent consensus statement states that a prebiotic is “a substrate that is selec­tively utilized by host microorganisms conferring a health benefit” [3].

What Does a “Prebiotic Effect in Infants” Mean?
In studies involving human infants, there are different opinions about what a “prebiotic effect” is. Often, studies concentrate on various goals:

As there is no clear definition of what is meant by “a prebiotic effect has been found,” the question “how can it be concluded that GOS, FOS, and other PBOs have the same prebi­otic effect as HMOs” arises. 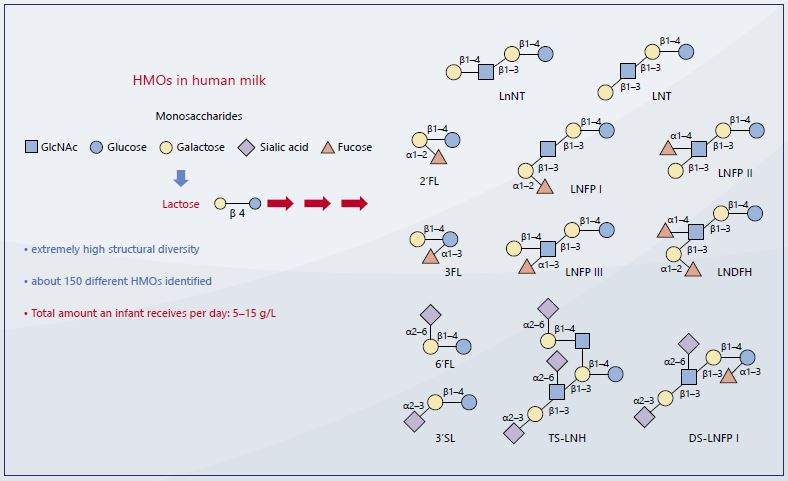 Figure 1: Examples of the complexity of single HMOs with a high potential for specifc functions due to their different linkages between monosaccharides. No other biological fluid contains such a high variety and structures as human milk [6].

Is There a Similarity between PBOs and HMOs?
In most scientific publications, PBOs are compared and considered to be similar to or even identical with HMOs, including reviews on their functional aspects. Some infant formula-produc­ing companies go as far as to claim in consumer information that both groups of carbohydrates share similarities re­garding structure and function.

However, although PBOs and HMOs belong to the same chemical class of carbohydrates, they do not share structural similarities that would be necessary to speculate about sim­ilar biological functions. If there were structural similarities, human studies would be needed to definitely show (i) what a “prebiotic effect” specifically means and (ii) that PBOs such as GOS and FOS show the same effects as HMOs in infants?

To demonstrate the difference be­tween GOS/FOS and HMOs, two ma­jor aspects have to be considered: (i) the monosaccharide composition and
(ii) the linkage between them. The lat­ter is of particular importance, since specific functions including defence mechanisms, immune functions, or anti-inflammatory effects strongly de­pend on those linkages.

Where Do HMOs Come from?
Naturally, HMOs are solely produced in the lactating mammary glands. Only re­cently it has become possible to pro­duce some of them on a large scale by various means. To differentiate be­tween HMOs from the mammary gland and technically produced HMOs, I sug­gest to called the latter “identical HMOs” (iHMOs), since they are the same as those produced in lactating mothers.

Are GOSs and FOSs Present in Human Milk?
GOS and FOS are not present in hu­man milk. For commercial reasons, some companies conclude that the addition of GOS and FOS to infant for­mula will bring them closer to human milk. However, there is no structural similarity between PBOs and HMOs. This is even the case for “galacto­sylated oligosaccharides from milk” (a term that can be found on the label of commercial products). Those GOS from milk are synthesized by lactose, either cleaving off glucose and galac­tose or using lactose itself, to elongate it by the attachment of galactose moi­eties in various numbers. These linear short or longer GOS still share no structural similarity with HMOs either. So far, no study has been carried out proving that the effects of GOS/FOS on, e.g., the immune system are com­parable to those of HMOs.

What Is Needed?
In recent years, major advances have been made in the field of prebiotics, mainly influenced by the progress made in understanding the role of the micro-biota in health and disease. Effective strategies to achieve a healthy micro-biota are certainly needed. In this con­text, the appropriate use of the term “prebiotics” would be helpful, but this also requires a more specific definition.

Figure 2: Monosaccharide composition of human milk oligosaccharides (HMOs) and prebiotics (PBOs) (a) and examples of specific linkages (b) 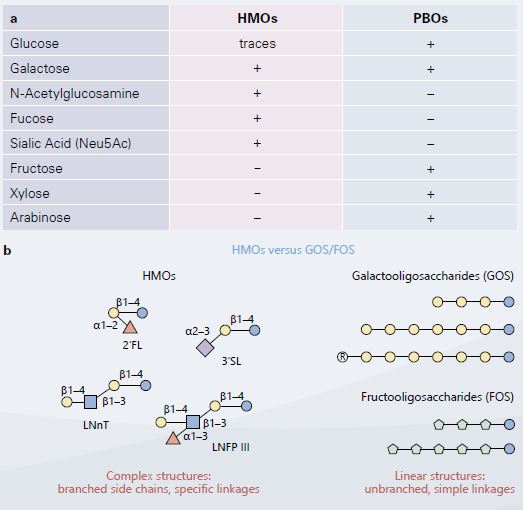