Gut Microbiota Is Not a Forgotten Organ Any More
Gut microbiota refers to organisms (bacteria, viruses, or eukaryotes) that are present in the gut. It has a profound impact on immunological, nutritional, physiological, and protective processes [1], it has been linked to health, and it is considered by some to represent a new organ in the human body. While it is often called “the forgotten organ” [2], the gut microbiota is no longer forgot­ten. On the contrary, it is a hot topic for research, as documented by the rapidly increasing number of scientific papers on this subject as well as coverage in the lay press, TV and radio programs, and social media.

Dysbiosis
Dysbiosis refers to altered gut microbi­ota composition and/or activity. A low diversity of gut microbiota may be con­sidered a marker of dysbiosis. At least in part, dysbiosis contributes to the de­velopment and progression of diseases such as allergy, obesity, irritable bowel syndrome, necrotizing enterocolitis, type 1 diabetes, and autism (in addition to other factors such as genes or envi­ronmental factors) [3]. However, the exact underlying mechanisms remain unclear. It remains to be determined whether the gut microbiota alterations are a cause or a consequence of these disorders. For none of the diseases has a specific “microbiota signature” been identified. The lack of standard­ized methods for microbiota evaluation may be responsible for inconsistencies among studies. Still, the association between low diversity of gut microbi­ota, which may be considered a marker of dysbiosis, and disease has been documented in a number of studies. From a functional point of view, low gut microbiota diversity is associated with reduced butyrate-producing bacteria, increased mucus degradation poten­tial, reduced hydrogen and methane production potential combined with in­creased hydrogen sulfide formation potential, and an increased potential to manage oxidative stress [4].

Modulating the Gut Microbiota
Targeting the gut microbiome with pro-biotics, prebiotics, or synbiotics could potentially benefit human health and reduce the risk of diseases. Other methods, not discussed here, include antibi­otics and fecal microbiota transplants.

Probiotics
Probiotics are “live microorganisms that, when administered in adequate amounts, confer a health benefit on the host” [5]. The most commonly used probiotics are Bifidobacterium and Lactobacillus species, and a species of yeast (Saccharomyces boulardii). Possible main mechanisms of probi­otic action include:

For a summary of the clinical ef­fects of probiotics in children [6], see Table 1. Considering that probiotics have many strain-specific effects, the focus should be on individual probiotic strains not on probiotics in general. The clinical effects and safety of any single probiotic or combination of pro-biotics should not be extrapolated to other probiotics. For a guide on how to choose a probiotic, see Table 2.

Table 1. Effects of probiotics in children (based on ref. [6]) 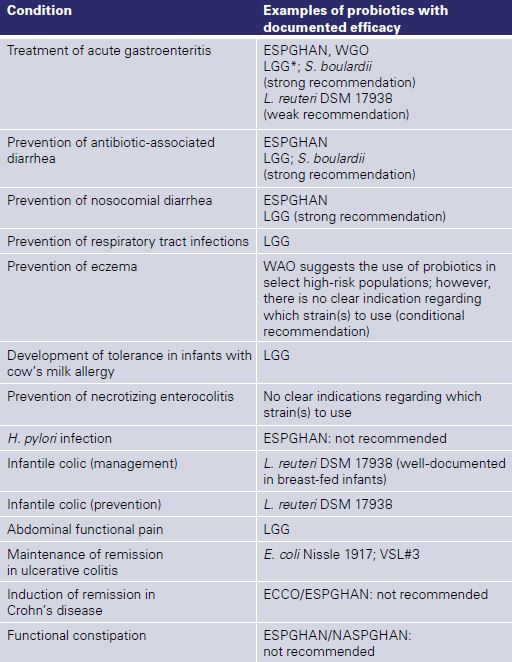 Prebiotics
A prebiotic is “a substrate that is selec­tively utilized by host microorganisms conferring a health benefit” [7]. One example of naturally occurring prebiot­ics are human milk oligosaccharides. Selected human milk oligosaccharides, such as 2-fucosylactose and lacto-N-neo-tetraose, are currently being added to some infant formulas [8, 9]. Inulin, oligofructose, fructooligosac­charides, galactofructose, and galac­tooligosaccharides are other examples of commonly used and studied prebi­otics, as they increase the fecal counts of bifidobacteria or certain butyrate producers.

In the pediatric population, selected prebiotics have the potential to: 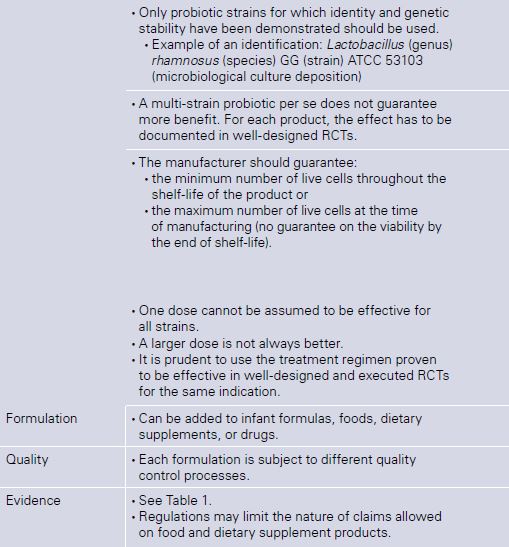 In the pediatric population, synbiot­ics have the potential to:

What Is Next?
Gaining a better understanding of how microbiota is linked to health and dis­ease is needed to develop next-gener­ation modulators of the gut microbiota. The latter, once developed, need to be evaluated in well-designed and executed randomized controlled trials with clinically important outcome mea­sures. In pediatrics, these outcomes relate to the risk of allergy, gastrointes­tinal and respiratory tract infections, overweight/obesity, and neurodevel­opment. For now, it is best to recom­mend the use of only those probiotics and/or prebiotics with documented ef­ficacy and safety and to use a regimen (dose and formulation, duration of treatment) proven to be effective in well-designed trials for the same indication.